You are here: Home / Management / Cone of Experience – Dale

Dale’s Cone of Experience – (Audio visual methods in teaching 1957) A scan of the model in the original book by Mike Morrison of RapidBI – yes we bought the book to see what was originally said about the Cone of Experience!

The Cone of Experience is a visual model meant to summarise Dale’s classification system for the varied types of mediated learning experiences.

Please read carefully. All is not as it first seems!
The original labels for Dale’s ten categories in the Cone of Experience were:

Dale researched learning and teaching methods. He found that much of what we know to be true of direct and indirect (and of concrete and abstract) experience could be shown in a pyramid or ‘pictorial device’. Dale called it ‘The Cone of Experience’.

In his book ‘Audiovisual methods in teaching‘ 1957 Dale stated that the cone was not offered as a perfect or flawless picture. It was not to be used literally. It was designed as a visual aid. Its aim was to to help explain the interrelationships of the various types of audio-visual materials. It also shows their individual ‘positions’ in the learning process.

Dale points out that it would be a dangerous mistake to regard the bands on the cone as rigid, inflexible divisions.

Dale said:
“The cone device is a visual metaphor of learning experiences, in which the various types of audio-visual materials are arranged in the order of increasing abstractness as one proceeds from direct experiences”

It is said that people remember:

The misleading percentages appear to have been first published by an employee of Mobil Oil Company. In 1967 written in the magazine “Film and Audio-Visual Communications”.

These percentages have since been discredited. THEY ARE FICTION! This is one of the great training/ people development myths.

Stands true – but only again as a saying, and NOT as statistical fact.

While Dale’s work is valuable as a metaphor (as he had designed it). The way a concept or model has been turned into fact is disturbing. How many of us and our learning believe these magic percentages to be fact?

Is Dale’s Cone of Experience a Fraud or Myth?

No. Not as he originally wrote it. But yes when ‘adapted’ by individuals without due consideration or backup research. 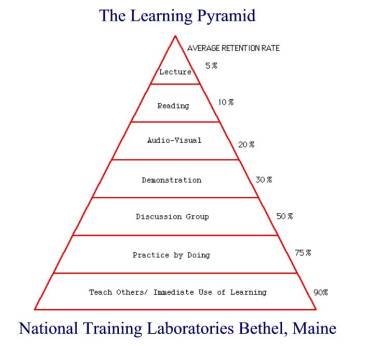 In a similar vein to Dale’s Cone of Experience is the Learning Pyramid from ‘National Training Laboratories in Bethel Maine’. In this example retention rates are shown as percentage rates against delivery techniques.

There is a lot of similarity between the two models. The difference is that this appears to be a complete hoax. With no underlying research of any kind.

(Fictitious). Research reported to be from the National Training Laboratories in Bethel Maine. The NTL summarises the impact different teaching strategies have on learning retention rates

Quite where these numbers come from is a mystery to many. Indeed it is difficult to understand what 90% retention actually means. 90% of what for how long? As a model it looks and on first look appears to be credible. As many of us will know, some people have almost 100% retention for a considerable period of time. Some people read something, others teach others from a structure or procedure which they themselves do not understand!

** NOTE
The NTL or National Training Laboratories has no record of any such research.
This ‘research’ is often and incorrectly attributed to NTL.
The real history is unknown. This is also fiction, unless you know otherwise.

The NUMBERS on the many quoted Dale’s Cone of Experience models and articles and the learning pyramid are models without any demonstrable research. They should not be used as fact. Indeed Dale never had any figures on his work. It was designed to be purely illustrative.

The Dale Cone of Experience is a visual model. It is meant to summarise Dale’s classification system for the varied types of mediated learning experiences.

This site uses Akismet to reduce spam. Learn how your comment data is processed.